Götrich, located in Östermalm in Stockholm, is Sweden’s oldest bespoke tailors and goes back six generations. Since 1730, the company has been offering its tailoring services – always focusing on quality and genuine craftsmanship.

Götrich offers personal and exclusive clothing for men, including tailor-made suits, coats, shirts, black tie, and hunting clothes. And the store is the opposite of fast mass consumption. This is the place you like classic clothing and style and want to wear timeless and hand made garments made of quality fabrics that last for a long time. Thanks to a collaboration with a UK tailor, Götrich can also offer its tailoring services at attractive prices.

Since the summer of 2019, Götrich has merged with Baron, another classic Swedish brand, which sells leather bags, portfolios, and other accessories. These two businesses complement each other perfectly, and together they form the obvious destination for the style-conscious man. It’s time for men in Stockholm to start goint to the tailor again.

Everything you need for the complete men's wardrobe

Götrich – going to the tailor is a forgotten dimension in life

One of Sweden’s oldest family-owned companies, Götrich, has been offering tailoring services in Stockholm since it was founded in 1730. In December 2017, the current owners took over the company after Elisabeth Götrich, widow after the last tailor in the long line of tailors in the Götrich family, which had run the tailoring business for almost 300 years. The next step for Götrich has been to merge its business with Baron, which sells leather bags and portfolios.

The merger was completed in July 2019. In the premises on Humlegårdsgatan, the tailors sit in the basement while the store for both leather and tailoring products is placed on the ground floor.

Baron is also an old Swedish brand, known since the late 1970s. Since 2012, the company has been owned by the Adelswärd family, which is also the only Swedish family to hold the official baron title.

“We know them from before and found out that we have incredible similarities in terms of the target group, aesthetics, and culture. If you like classic suits, you probably also like leather portfolios and vice versa. We’ve kept both brands separately, but Götrich moves to Baron to create a common premise on Humlegårdsgatan in Stockholm,” says Joakim Hartzell, CEO of the newly merged company.

“When we bought the tailoring business, we did it from both a commercial and a pure engagement perspective. Tailoring as a craft hardly existed in Stockholm, at least not as it was in the 1990s,” he says.

Joakim has worked in the financial industry for 15 years, and about ten years ago by coincidence, he stumbled upon a newly established tailor on Savile Row in London, started by two former bankers, Cad & the Dandy. In London, many of the older tailoring businesses were still around, but no one aimed for a younger target group in the same way as Cad & the Dandy did.

“I became a devoted customer early on and got the benefit of following their journey for ten years as they went from being completely new to becoming England’s largest tailor with about 130 tailors. They succeeded in creating a much more modern tailoring experience and much more attractive pricing, thereby also reaching new customer groups, especially young bankers in the city.”

For a long time, they were thinking about doing something similar in Sweden and gradually began trying to understand the local customer group. After a big and successful event at Lydmar in the fall of 2017, Joakim, the two co-owners of Cad & the Dandy and two other Swedish partners decided to do something more solid in this country.

“At about the same time, we got the chance to buy Götrich by pure luck. No one in the younger generation of the Götrich family wanted to take over the business,” says Joakim Hartzell.

“That’s where Elisabeth and I met. Other interested buyers had approached her, but no one who was devoted to tailoring as a craft and tradition in the same way. When she understood what we wanted to do, she decided to sell the company to us, and she still works in the business to this day.”

During the one and a half years since the takeover, Joakim and his partners have worked continuously to create a larger and younger customer group, which has been a success. The business has tripled in a short time, and both the tailoring and the company have got a lot of media coverage, such as Dagens Industri, Veckans Affärer, Affärsvärlden, and the magazine Civilekonomen. In this way, the brand has been re-established, and the customer group has been developed to include younger people, not least in the financial sector.

When they took over, they were five co-owners who bought the business; the two Englishmen from Savile Row and three friends from Stockholm, all of them Graduate Economists.

“In ten years, Cad & the Dandy has become England’s largest tailoring business, and England is the country that for the longest time have had the largest tailoring industry. The company currently has 130 active tailors, while Götrich in Stockholm has only three.”

There is a business difficulty in tailoring since it typically can’t be scalable. Joakim Hartzell exemplifies that it takes about 60 hours for a tailor to complete a suit.

“Imagine three tailors here. It’s easy to understand that it’s difficult to get such a business to grow significantly in terms of sales with that capacity.”

With the two English partners from Savile Row, there are now entirely different possibilities in terms of capacity.

“With our colleagues in London, we can use 130 tailors, which means we can sell more and at much more attractive prices.”

The London tailor has also developed sophisticated systems for creating and managing patterns. Unique customer patterns for tailor-made clothing have traditionally been created on paper, but now it can be done digitally instead. With the help of digital workflow systems, different tailors can then do different steps even if they’re in different workshops.

“For the customer patterns we create here in Stockholm, only about 10 percent of the sewing needs to be done on-site. This means that we have multiplied our capacity. Of course, we can still sew all the elements on-site in our workshop on Humlegårdsgatan, but at a completely different price.”

The new way of working is revolutionary for the pricing of traditional tailoring. The cost of sewing a two-piece suit two years ago, when everything was sewn in Stockholm, was SEK 36,000, while the price today instead starts at SEK 13,000.

“Basically, we sew the same suit. We create patterns and make measurements in Stockholm but rent out time-consuming work, which creates price advantages. It’s still the same culture and expertise in the craft, but we work in a more modern way that benefits the customer through lower prices,” says Joakim Hartzell.

He points out that there are further essential prerequisites for being able to re-create the brand and to restore tailoring as a commercially viable craft. There is a tremendous romance within the tailoring industry and a keen interest in classic clothing and fabrics.

“There must be a genuine interest in the craft and a respect for the knowledge and craftsmanship. People dedicated to quality in food, wine, and culture all have in common that they are attracted by things that are done ‘for real.’ They have respect for the raw materials and the knowledge that has been developed over several generations. It becomes an experience and also an end product that both is different and is experienced as different,” says Joakim Hartzell.

Today there is a large group of people in Sweden who are genuinely interested in classic fashion and style and who participate more and more in the global community that has emerged on social media and forums on the internet.

Many Swedish profiles have become internationally recognized in the field. For example, the Swedish profile Andreas Weinås has about 140,000 followers on Instagram, and he has become a respected authority worldwide. There are also a handful of other Swedes who are frequently seen in the same type of context, including one of Götrich’s co-owners, Erik Mannby.

“Tailoring as a craft is experiencing a new global renaissance, especially among men born in the 1980s or later. The movement has gone hand in hand with the interest in crafts in, for example, food which has led to ‘chefs becoming like rock stars.’ Tailors in Italy and England have sometimes achieved similar status among the devotees,” says Joakim Hartzell.

“Another example of how classic style have found the younger target groups is that the black-tie has become much more common as a dress code again.”

He’s born in 1979 himself and is therefore quite right in the target group. He was ‘infected’ by the classic clothing style during his time in England.

Now that Götrich has merged its business with Baron, it has been refined in a whole new way.

“We want to create a welcoming and open environment that shouldn’t feel challenging to enter. You don’t have to know anything, nor do you have to buy anything, to be welcome. It’s about creating a pleasant environment for everyone interested, even if you lack the economy or the need for the moment. Everyone is warmly welcomed to browse the fabric books and share their thoughts.”

“I think that consumption is about to be divided into two distinct groups, where one is primarily about fast mass consumption. In that group, accessibility and speed are critical factors. The typical example is someone who ‘needs a t-shirt now,’ right away. The second group is more about personal and exclusive; you invest in garments, bags, and shoes of high quality that should last for many years. Then speed isn’t as important. Instead, it’s about the customer experience and the quality of the final product that matters.”

“In this case, you as a customer can participate in developing your personal pattern so that the fit becomes perfect for your body. You’re also free to choose fabrics, and how pockets, shoulders, and other details should look. Then you get something that you can enjoy for many years, which is sustainable and created solely from pure natural materials. We create garments that’ll last a long time and can continuously adjust and repair the garments so that the life span is significantly extended. It’s partly about choosing fabrics that suit their purpose, but also about creating the garments by hand in a way that allows them to maintain the structure and shape over time. It’s also a key from a purely environmental perspective.”

In essence, Joakim Hartzell and the other owners want to teach men in Stockholm to go to the tailor again. It’s a forgotten dimension in life, he says. 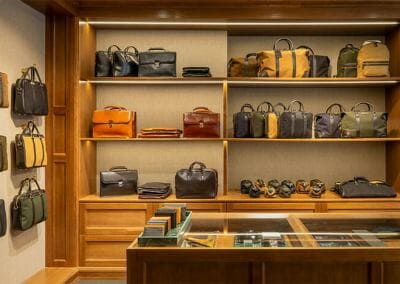 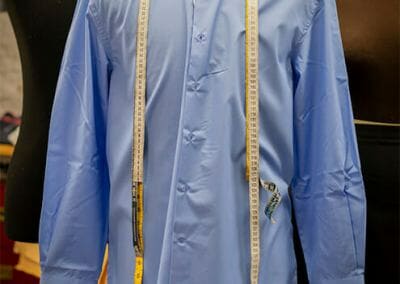 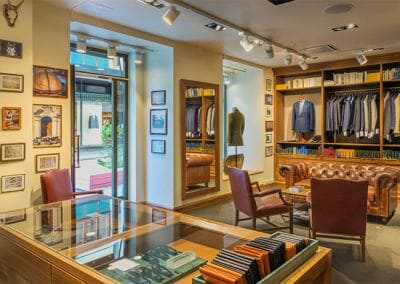 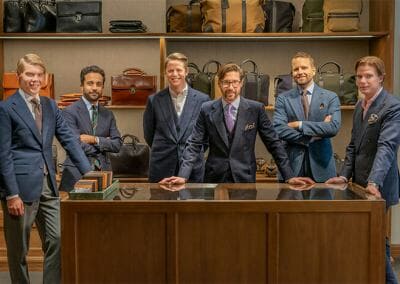 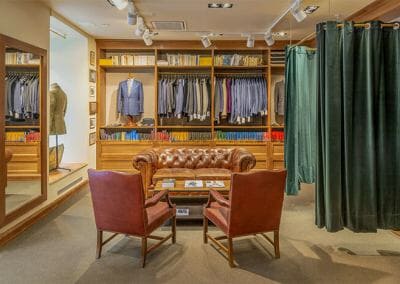 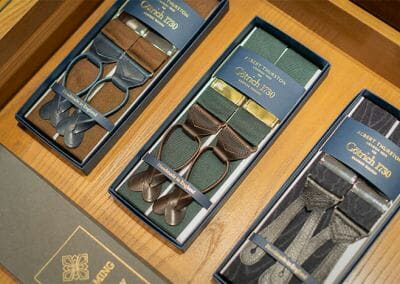 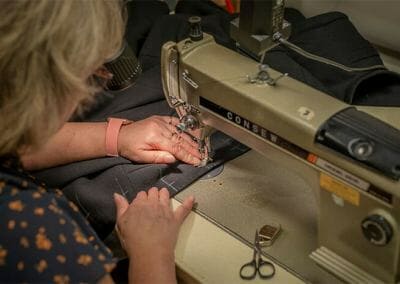 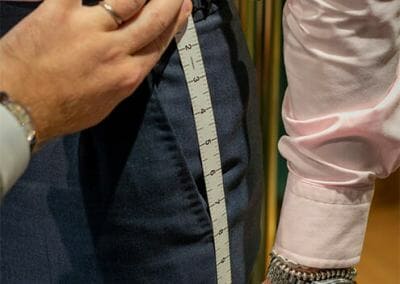 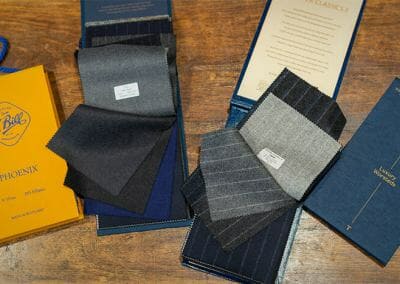 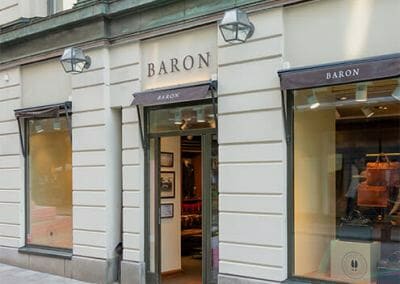 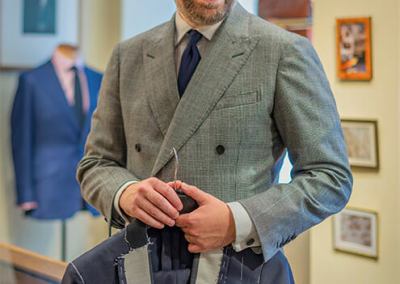 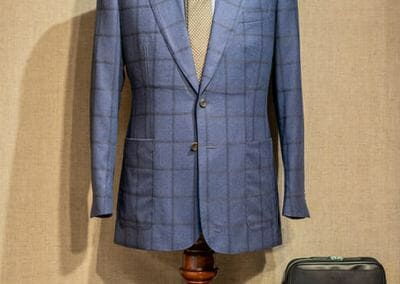