In the corner of Scheelegatan 8 and Bergsgatan 15 in Kungsholmen, you’ll find Lokal Izakaya, a restaurant and bar with one leg in Japan and the other in Scandinavia. Here you get an experience out of the ordinary, whether you just want to have a drink at the bar or you’re looking for a night out.

The menu has its roots in Sweden but is inspired by Asia. You’ll find everything from veal tartar and Swedish pike perch to fried udon and onigiri. Local Izakaya has a clear focus on high-quality ingredients, and the concept is primarily tasting menus a la sharing style, where everybody shares the dishes.

After dinner, you can end the evening with a delicious cocktail at the bar, which is decorated with an impressive painting (8 x 3 meters) of Japanese geishas. The rest of the interior is classy and stylish with a lovely mix of Scandinavia and Asia – on the wall shelves you will find everything from Dalecarlia horse to Japanese tea sets. Add a great ambiance and first-class service, and you have a perfect concept.

Judging by the name, we’re entering the Japanese restaurant Lokal Izakaya on Scheelegatan on Kungsholmen in Stockholm. It’s a delusion that’ll soon be corrected. Step by step, during a couple of years, the restaurant’s concept has become a Japanese pub, offering tasting menus with a ‘refined’ Japanese concept. The concept also includes carefully selected drinks – and an unexpected nightclub!

The description of Lokal Izakaya on the left is delivered by the restaurant manager who View Stockholm meets over a cup of coffee together with head chef Oliver Sundfeldt and bar manager Patricio Gonzalez.

For many years, you could find the popular French restaurant L’Escargot at Local Izakaya’s address in the crossing between Bergsgatan and Scheelegatan.

Today it is food and drink that dominates in the afternoon and evening, but when the night comes, the room is transformed into a nightclub again. In other words, Local Izakaya hasn’t let go of the nightclub idea, even though the food is the main thing. During the weekends it’s difficult to get a table at the restaurant.

But when the food has been served, eaten and digested, perhaps some of it in the impressive bar, the room is transformed by creating a passage to the neighbor night club Lemon Bar. During the late – and really early – hours of the day, the two places with the same owners merge into one night club.

The tasting menus are essential for understanding what restaurant we’re in. It’s the menu you should eat to get the best experience in this restaurant.

“It’s a good and carefully considered amount of food, in thought-out combinations in our menus,” says the head chef Oliver and describes the work of creating the tasting menus.

Besides himself and the restaurant manager, the bar manager Patricio is the third person in the trio, and it’s a broad and deep collaboration behind each menu, including drinks, that’s presented to the customers.

The three of them have worked together for a couple of years, but it’s the bar manager Patricio that’s been there for the longest time.

“We always work seasonally with Swedish raw ingredients if possible, but with Japanese flavors. And we use the skills we have in-house,” Oliver says.

Therefore, it’s no surprise that there’s a chef from Peru and one from the United States in the kitchen. They all, including the head chef himself, have experience from other modern restaurants in Stockholm.

“The teamwork between the three of us makes it fun, we all have a passion for this kind of food. It’s important to stand out,” Oliver says.

“We want to decide how the guest should eat to get the best experience. In close collaboration, the three of us have created the food, the drink menus for the food, as well as cocktails that go well with the food. We have established drink concepts, which we try out together,” Patricio says.

A new drink concept isn’t something you fix in an afternoon. It’s a job that takes time, and the new drink is tasted in different stages and corrected step by step. All three are part of the tasting and add their thoughts on changes. It’s of essential that a drink menu, or a cocktail, fits perfectly to the food served, Patricio believes.

The Peruvian ceviche is an important ingredient in the menu creation. The ancient Peruvian dish has become extremely popular all over the world, and it’s also one of the foundations of this kitchen based on Japanese cuisine. In no doubt, a good crossover-ground for a trendy restaurant that should attract modern restaurant guests, preferably an international mix of people.

Peruvian ceviche is often made of a mixture of seafood and fish. Then you add garlic, coriander or ginger, and serve it with corn or sweet potatoes. On the recipe level, it’s a fairly straightforward dish, but it requires a good understanding of the ingredients. And at Local Izakaya, ceviche is just the foundation that they consistently create new menus, with new drinks, from.

Patricio often works with the Japanese rice wine sake as a base, and many times also tea and ‘food spices.’ An example can be a tandoori drink.

But he also often mixes different kinds of pisco for the tasting menus, since the food is based on ceviche. Pisco is the national drink in both Peru and Chile and is made from distilled wine. It’s quite strong, usually between 35 and 48 percent.

Patricio is the one who has worked at the restaurant for the longest time since the concept changed a few years ago. His job is, among other things, to cooperate with the kitchen to understand how the food works and how he should ‘translate’ the food into drinks.

“I mix new bar drinks and dinner drinks as compliments to the food. I’m looking for wines that go well with the food. I want our drinks to be innovative,” he says.

There are usually six to eight new tested drinks each week, according to Patricio, and most of them don’t end up on the menu. He wants to offer drinks for the food because they enhance the flavors.

“My goal with the drinks is to help the guests to drink smartly and learn. Liquor is great to drink with the food; it doesn’t just have to be wines.”

“We always ask each other what we think of a new drink. Should it be more or less sour, and does it fit the food? We also often guess the ingredients in both food and drink, and we always try the dishes before we have the big menu tasting,” Oliver says.

The interior at Local Izakaya has its own history. The graphic design of the room overwhelms a lot of the visitors. The restaurant manager is responsible for the graphic, whether it’s the wallpapers, or how food and drink are presented on the menus for the guests.

“It’s my most important task. When you leave you should feel like you just had a wow experience,” he says.

On the wall, there is an eight-meter long and three-meter high painting of Japanese geishas made by the artist Marinko. It’s impossible not to see and be affected by, and it’s a significant part of the total experience at the restaurant.

When View Stockholm was visiting, the head chef recommended the five dishes in the tasting menu. Initially, all guests receive a miso soup made from roasted cauliflower. Then we were served a tasting menu with sashimi, that is varied between tuna and salmon. The second dish is generally a ceviche, followed by a fish dish and lastly a meaty main course. The meal ends with dessert and candy.

To this food, we drink white wine, a riesling, and to the ceviche, a whiskey sour is served which ‘fits perfectly,’ then white wine again to the fish dish and red wine to the meat. The dessert ends the menu drinks with a rhubarb, coconut and chili drink.

So how should you categorize Local Izakaya? The answer comes from Patricio: a ‘dinner club on the weekends’ that in the late evening transforms from cocktail to nightclub with a dance floor.’

“The guests are positively surprised by everything under the same roof; nightclub, dance floor, food and drinks, bar and the interior,” Oliver says.

Visitors are slightly older, and the age limit is 23 years. Most of the guests are between 25 and 40 years old. Many of them are tourists who live at Kungsholmen’s nearby hotels. 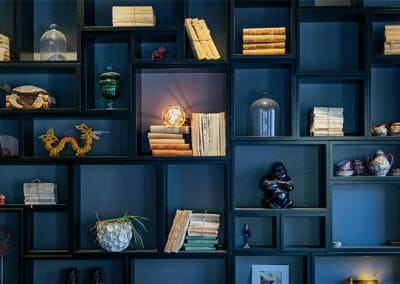 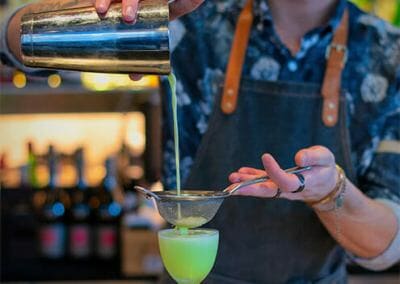 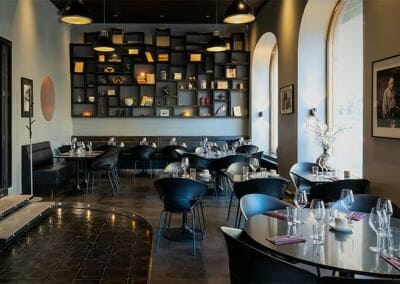 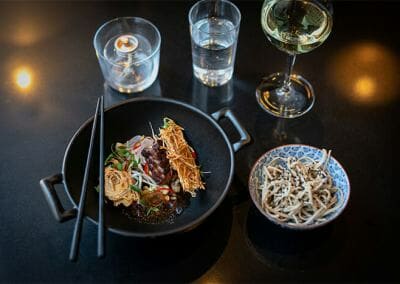 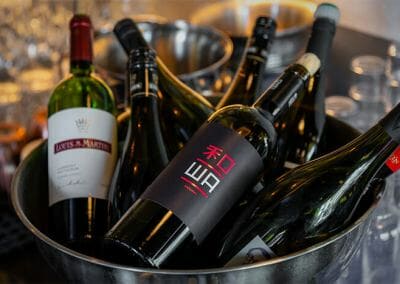 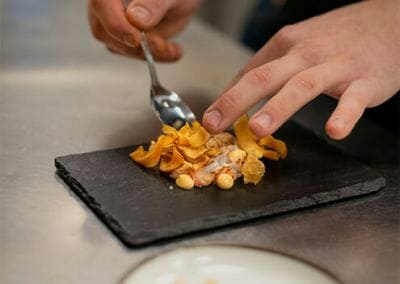 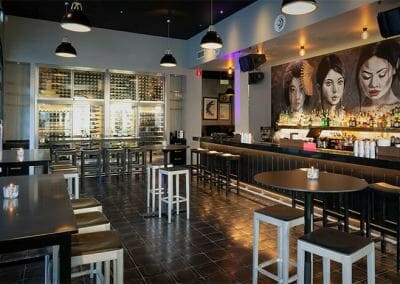 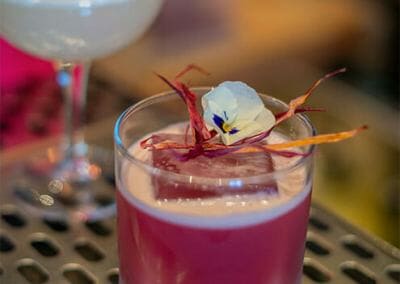 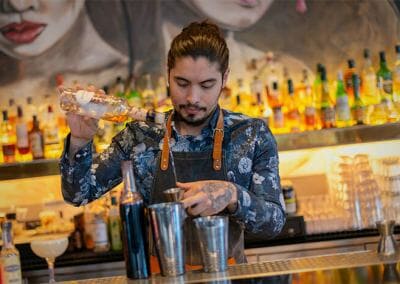 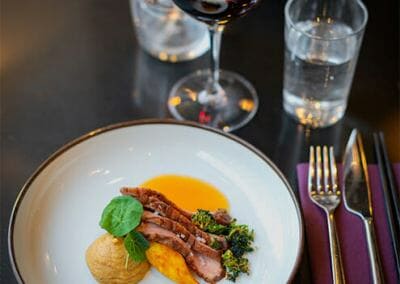 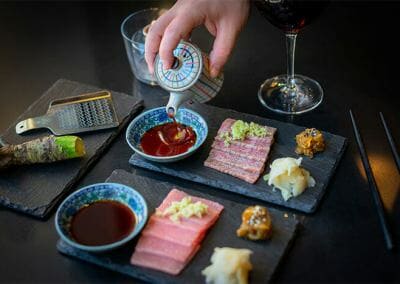 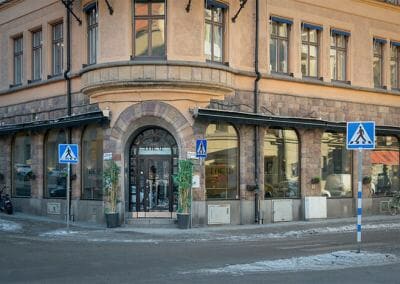