Is there anything more refreshing than a Pisco Sour on a steamy summer Stockholm afternoon? White brandy made from Muscat grapes combined with key lime, egg whites, sugar, crushed ice and a few drops of Angostura bitters and suddenly you are sipping on a little bit of heaven, slowly unwinding, and preparing your taste buds for the pleasures that await you. You’ll find this drink, which packs something of a punch, at what many will argue is the only authentic Peruvian restaurant in Stockholm.

Located in the newly revived Hornstull area of Stockholm’s trendy Södermalm district, Barranco exudes a deceptively casual atmosphere, filled with light and a colourful décor, with full-length windows that open onto the street terrace. It all sets the mood for either a light meal or some serious feasting. View Stockholm chose the second option and oh, are we happy we did. 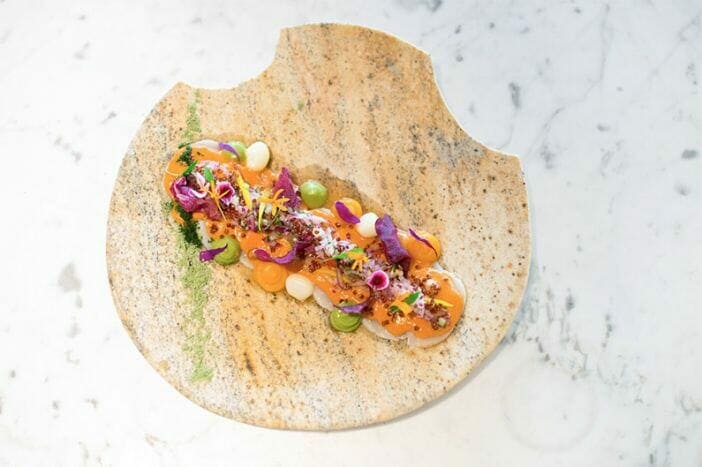 Chef Eddy Vargas used to work at Piscoteket in Oslo, rated as the best Peruvian restaurant in Scandinavia, and he brought his skills to Stockholm when he opened Barranco towards the end of 2015. His touch is delicate and his instincts spot on – and he has created a ludicrously good menu that has just the faintest of Scandi touches.

Peruvian cuisine has often been described as ‘four continents in a single country’, and is listed in the Guinness Book of Records for having the largest variety and diversity of traditional dishes in the world. Influences range from pre-Columbian heritage (Incas, Amazonas, Spain, and Africa) to more modern ones (French, Cantonese, Japanese, and Italian) and the result is a multi-layered taste experience that throws up unexpected combinations that will have you scratching your head as to how all these ingredients work together so well.

We began with the Chorittosa La Chalaca, which, like all the dishes at Barranco, was beautifully presented on rustically elegant plates. Marinated mussels, lime, coriander, red onion, celery, and chilli melded together to create a bit of a party on the palette. The Cebiche Tiradito – thinly sliced scallops served with onion, coriander, jumbo corn and aji rocoto (a wonderfully sneaky chilli) was equally fantastic, but definitely not for those who don’t like heat. 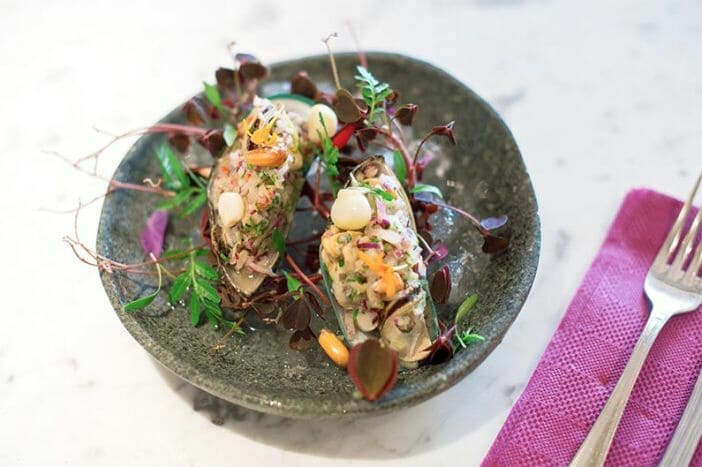 One of the stars of the show was the Cebiche Chifero: incredibly fresh rainbow trout with onions, avocado, sesame seeds, peanuts, and a crispy wonton set in a sauce that had just enough of a bite to make you remember each spoonful. The trout was soft – nearly melting in your mouth – and if you think avocado and peanuts don’t make a happy marriage think again. The Cebiche Classico was equally good.

Causa Lima not only packs a flavour punch, it also packs quite a historical punch. (but we’re not going to get into that discussion because Barranco is about food, not reliving historical grievances!). There are as many versions of this dish as there are stories about its history but it’s safe to say that this unexpected mixture of potato, lime, chilli, fish, seaweed, and bleak roe is another winner.

And then there was the vegetarian dish. It had no name – other than ‘Vegetarian’ – and quite frankly after tasting it there is no other vegetarian dish worth eating. A corn patty – or casserole, as it says on the menu – served with sweet potato chips, avocado cream, and seared beans doesn’t sound like much to write home about but get your writing paper out because if the road to vegetarianism is paved with this dish I’m on my way.

The menu at Barranco is very reasonably priced, with a number of dishes offering the option of a smaller or larger version. Many of the unique ingredients are imported directly from Peru, the emphasis is on freshness and while the dishes remain true to Peruvian heritage Chef Eddy Vargas isn’t afraid to throw in some very welcome surprises. 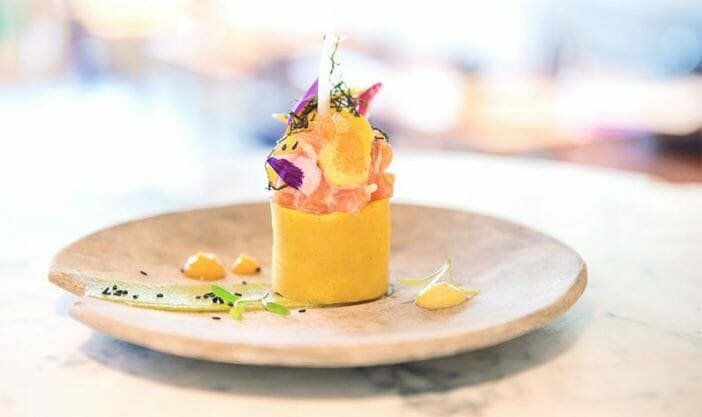 Can View Stockholm recommend Barranco? Yes indeed. In fact, View Stockholm can say Barranco is one of the more unusually surprising eateries in the city, one that will quickly convert those who haven’t tried Peruvian cuisine.

And can we once again recommend beginning your visit with a refreshing Pisco Sour? Sure we can! You won’t regret it.

Pisco is a spiritous beverage that is produced by distilling fresh grape must. It is made in the Peruvian coastal city Pisco.

The name Cebiche (can also be called ceviche or seviche) comes from the Quechuan language and means “fresh fish”. It is the most popular dish in Peru.